The All-New Super Friends Hour featured four animated shorts per program, following a basic format each week. The first segment of every show featured two of the heroes (for the purposes of the team-ups in the first and fourth segments, Batman and Robin were considered "one hero") teaming up in a separate mini-story. The second segment featured a story with the Wonder Twins. The third segment was considered the "primary" adventure of the week, featuring the entire Super Friends roster (including the Wonder Twins) in a longer adventure. The fourth and final segment featured a story with one of the primary lineup and a "special guest star". This segment typically featured a problem that was solved using the guest star's unique abilities. Between segments there were short spots with members of the Super Friends giving basic safety lessons, providing first-aid advice, demonstrating magic tricks, creating crafts, and presenting a two-part riddle featuring the week's primary plot line. This was the first season to feature two villains appearing in the comic books, Black Manta and Gentleman Ghost. Black Manta's costume was not black, and he was only referred to as "Manta"; both he and Gentleman Ghost only appeared in one episode this season 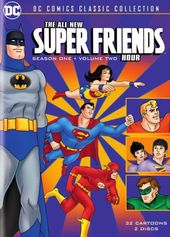 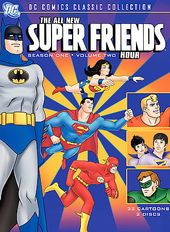