After being asked to unravel a bizarre murder case, private investigator Vicki Nelson realizes that uncovering who - or what - the killer is may be a lot harder than for her typical case. During a stakeout the ex-cop meets Henry Fitzroy, who looks to be an irresistible twentysomething playboy but claims he's actually a 450-year-old vampire! Though she has trouble swallowing his story, Henry has interesting insight into the case, so Vicki teams up with him to nail the killer. But things get complicated when sparks ignite between this unlikely pair, and Vicki's ex-partner and former flame, who immediately distrusts Henry, takes an undue interest in the new partners' undeniably electric connection. "Blood Ties," based on Tanya Huff's best-selling Blood Books novels, follows Vicki as she finds herself more and more drawn to probing the unexplainable, leading her to walk a line between the supernatural and earthly worlds, torn between the men on either side. 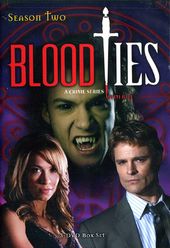