Campion, Albert, born 20 May 1900. Name known to be a pseudonym. Edcuation privileged. Embarked on adventurous career 1929. Justice neatly executed, specialist in fairy stories. This English show brings to life an enigmatic gentleman detective from Margery Allingham's detective stories set in the 1930s. Blinking owlishly behind his tortoise-shell glasses, amateur sleuth Albert Campion (played by Peter Davison) has a less-than-obvious fondness for dangerous adventure. He is supported by a clever but shady manservant in the craggy shape of Magersfontein Lugg (Brian Glover), probably the only gentleman's gentleman in fiction who looks and sounds like an old prize fighter. Although Margery Allingham wrote twenty-six Campion novels, only eight of her stories were filmed in this series. The eight episodes (each usually broadcast in two parts) are still occasionally repeated in the U.K. and elsewhere. 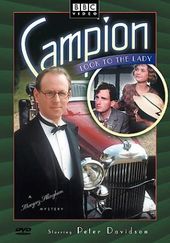