"Its the end of something simple. And the beginning of everything else" Set in the fictional town of Capeside, MA, Dawson's Creek is the coming of age story of four friends on the verge of adulthood. Dawson, Joey, and Pacey are life long friends, whose lives start to rapidly change when a new girl, Jen, moves in next door to Dawson Leery and the foursome start high school. Along the way they are joined by two other newcomers to Capeside, Jack and Andie. Often characterized by it's intelligence, sharp wit, and SAT vocabulary, Dawson's Creek was created by Kevin Williamson. It was loosely based on his life, with each character incorporating a different aspect of himself. The show quickly launched the careers of it's stars and in the words of The WB, "defined a network." Dawson's Creek was filmed primarily on location in Wilmington, NC. Opening Theme Songs: "I Don't Want To Wait" performed by Paula Cole and "Run Like Mad" performed by Jann Arden - Season 1 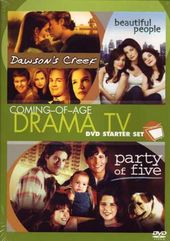