Dharma Freedom Finkelstein-Montgomery (Jenna Elfman, "Townies") is a free-spirited yoga instructor with an incredible knack for looking on the bright side. Raised by hippie parents, she was taught to shun convention, trust her wildest instincts, and find the joy in everyday life. Her husband, Greg Montgomery (Thomas Gibson, "Chicago Hope"), is a conservative, Harvard-educated attorney and the yin to Dharma's yang. Married on their first date, they have remained committed to each other from day one, despite the obstacles presented by the world around them. Among those obstacles are Dharma's counterculture parents, Abby (Mimi Kennedy) and Larry (Alan Rachins), who recently brought another bohemian bundle of joy — baby Harry — into the world. On the other side, literally, are Greg's uptight, blue-blood parents, Kitty (Susan Sullivan) and Edward (Mitchell Ryan), who've slowly but surely come to accept the fact that their son married outside the country club boundaries. Executive producer Chuck Lorre made minor television history by taking advantage of the fact that many fans didn't see the show at the time of its broadcast: for those who videotaped the show, each episode's end credits reveal a special message from Lorre on a vanity card. These are currently being added and can be found under the "Notes" section for each episode. 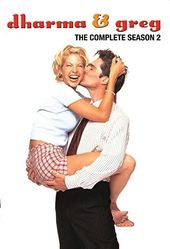