Racing legend John Force, his wife Laurie, and his three drag-racing daughters Ashley, Brittany and Courtney take viewers on a behind the scenes look at the everyday life of the Force family. John has a fourth daughter, Adria, is the CFO of John Force Racing, Inc. John missed out on much of the girls' upbringing since he was out on the road in the drag racing circuit. Now John is trying to bring the family together and spends most of his time with the girls as he brings them into his profession. It's a real-life reality series about the life of a drag racing family and what its like to have the fastest man in the world as your father. John Force is a 14 time NHRA Champion Funny Car driver in the NHRA. Ashley Force drives a Funny Car in the NHRA. Brittany and Courtney both run Super Comp. Fasten your seat belts. 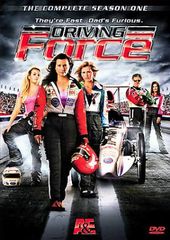