TV Shows The Kids in the Hall

Get ready for sketch comedy...Canadian style! The Kids In The Hall are a hilarious sketch comedy troupe. They got their name from a comedian named Jack Benny, who would often end a joke by saying: "I got this from the kids in the hall", referring to the amateur comedians who would hang around outside his office. KITH was formed in 1984 when McCulloch and McKinney, who had worked together in Calgary as part of a group named the Audience, teamed up with Foley and McDonald's Toronto-based group, KITH. Thompson officially joined in January 1985. That same year, McCulloch and McKinney were hired as writers for NBC's Saturday Night Live after a talent scout saw KITH in performance. Significantly, SNL had also been created by Michaels, himself an ex-patriate Canadian living and producing in New York. Still in 1985, Foley appeared in the film High Stakes, and Thompson and McDonald toured with Second City. In 1986, KITH were reunited in Toronto and Michaels finally saw them perform 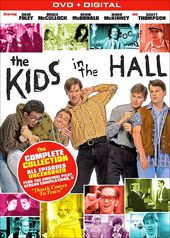