Get ready to root for the bad guys, here comes THE LEAGUE OF SUPER EVIL! Armed with a whole new approach to badness, these four Super Villains have set their sights on nothing less than total neighbourhood domination! L.O.S.E. is helmed by the diminutive GREAT VOLTAR, whose grandiose plans are generally miniscule and child-like—and give new meaning to the term lowered expectations! Then there’s gadgeteer DOKTOR FROGG, whose evil genius is diminished only by his incredibly bad luck. Bringing the muscle is former Siberian farm-boy REGINALD “RED” MENACE, an all-around gee whiz swell guy, who only unleashes his anvil-sized Fists of Judgement on those who really got it comin'. And we can’t forget the completely unpredictable DOOMAGEDDON, a pan-dimensional hell-hound who gives new meaning to the words "bad dog." Between battling obnoxious traffic cops, flogging watered-down lemonade, or scheming to be first in line for the new iDestruct, L.O.S.E. struggles ever-onward toward its 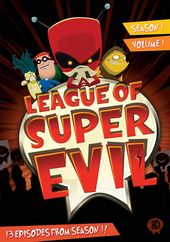 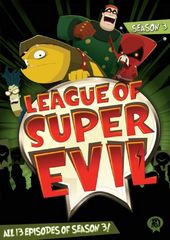 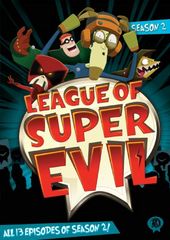