Grab a beer and drop your pants send the wife and kid to France It's The Man Show Quit your job and light a fart Yank your favorite private part It's The Man Show! It's a place where men can come together Look at the cans on this chick named Heather Juggy girls on trampolines Time to loosen those blue jeans It's The Man Show! The show celebrates all that is manly, from beer to women to porn, and though is at times less than tasteful, never takes itself seriously and does everything tongue and cheek along with a wink and a smile. After 4 season, the co-hosts Adam Corrolla and Jimmy Kimmell moved on, and were replaced by Joe Rogan and Doug Stanhope. This is beleived to be what killed the show, after it was cancelled after just one season with the new hosts. 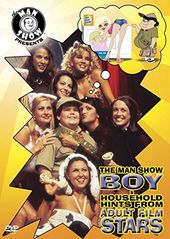