The show features Izzard and Driver as Wayne and Dahlia Malloy who, along with their family, are Irish Traveller con artists and thieves. They travel with their children Di Di (Delilah), Cael, and Sam. As the series begins, Dahlia has just been paroled from prison. During her 2-year sentence, she has developed various drug addictions. In her absence, Wayne and the children have been continuing to act as con artists across the U.S. After a brief reunion with their Traveller clan, the family flees to avoid an arranged marriage for Di Di. Wayne steals a large amount from the clan's hoard of cash, and the family runs off. After getting into an altercation and RV chase with another Traveller family, the Malloys are involved in a car accident that kills a very wealthy couple, the eponymous Riches. In the hopes of pursuing a "better life", they adopt the Riches' identities in an affluent gated community in Baton Rouge, Louisiana. They struggle to adjust to their new lives as buffers, as they call people who are not Travellers. 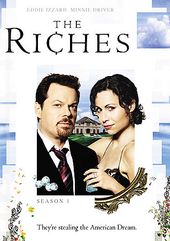