Rolling Stone: 3 stars out of 5 - "...It was the addition of Steve Howe's guitar pyrotechnics that finally allowed Yes to find their true identity. The following year's YES ALBUM is a gigantic leap forward..." 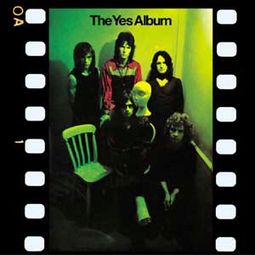 Yes: Jon Anderson (vocals, percussion); Steve Howe (acoustic & electric guitars, vachalia, background vocals); Tony Kaye (piano, organ, Moog synthesizer); Chris Squire (bass, background vocals); Bill Bruford (drums, percussion).
Additional personnel: Colin Goldring (recorder).
Recorded at Advision Studios, London, England in Autumn 1970. Originally released on Atlantic (8283).
All tracks have been digitally remastered.
Yes: Chris Squire (bass instrument, background vocals); Steve Howe (background vocals); Jon Anderson , Tony Kaye, Bill Bruford.
Personnel: Chris Squire (vocals, guitar); Steve Howe (vocals, acoustic guitar, electric guitar); Jon Anderson (vocals, percussion); Tony Kaye (piano, organ, Moog synthesizer); Bill Bruford (drums, percussion).
Additional personnel: Colin Goldring (recorder).
Audio Remasterer: Bill Inglot.
Liner Note Author: Bill Martin .
Recording information: The Lyceum, London, England (07/17/1970).
Photographers: Phil Franks; Barry Wentzell.
Unknown Contributor Role: Steve Howe.
On Yes' first two albums, Yes (1969) and Time and a Word (1970), the quintet was mostly searching for a sound on which they could build, losing one of their original members -- guitarist Peter Banks -- in the process. Their third time out proved the charm -- The Yes Album constituted a de facto second debut, introducing the sound that would carry them forward across the next decade or more. Gone are any covers of outside material, the group now working off of its own music from the ground up. A lot of the new material was actually simpler -- in linear structure, at least -- than some of what had appeared on their previous albums, but the internal dynamics of their playing had also altered radically, and much of the empty space that had been present in their earlier recordings was also filled up here -- suddenly, between new member Steve Howe's odd mix of country- and folk-based progressive guitar and the suddenly liberated bass work and drumming of Chris Squire and Bill Bruford, respectively, the group's music became extremely busy. And lead singer Jon Anderson, supported by Squire and Howe, filled whatever was left almost to overflowing. Anderson's soaring falsetto and the accompanying harmonies, attached to haunting melodies drawn from folk tunes as often as rock, applied to words seemingly derived from science fiction, and all delivered with the bravura of an operatic performance -- by the band as well as the singer -- proved a compelling mix. What's more, despite the busy-ness of their new sound, the group wasn't afraid to prove that less could sometimes be more: three of the high points were the acoustic-driven "Your Move" and "The Clap" (a superb showcase for Howe on solo acoustic guitar), and the relatively low-key "A Venture" (oddly enough, the latter was the one cut here that didn't last in the group's repertory; most of the rest, despite the competition from their subsequent work, remained in their concert set for years to come). The Yes Album did what it had to do, outselling the group's first two long-players and making the group an established presence in America where, for the first time, they began getting regular exposure on FM radio. Sad to say, the only aspect of The Yes Album that didn't last much longer was Tony Kaye on keyboards: his Hammond organ holds its own in the group's newly energized sound, and is augmented by piano and other instruments when needed, but he resisted the idea of adding the Moog synthesizer, that hot instrument of the moment, to his repertory. The band was looking for a bolder sound than the Hammond could generate, and after some initial rehearsals of material that ended up on their next album, he was dropped from the lineup, to be replaced by Rick Wakeman. ~ Bruce Eder