Humphrey Bogart portrays Geoffrey, who's making a habit of poisoning one wife and marrying another when the former no longer inspires his canvases. Barbara Stanwyck plays his current wife Sally, who puts two and two together. 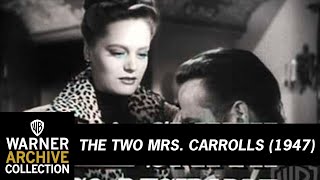 Matrimony means different things to different people. For temperamental artist Geoffrey Carroll, it means he's in his element. And out of his mind.

In their only screen pairing, two of film's all-time greats star in a psychological thriller rife with pelting rain and pealing bells, blackmail and murder, calculated dread and an unnerving finale. Humphrey Bogart portrays Geoffrey, who's making a habit of poisoning one wife and marrying another when the former no longer inspires his canvases. Barbara Stanwyck plays his current wife Sally, who puts two and two together and comes up with six -- as in six feet under, the place she'll be if she continues to accept the glass of milk Geoffrey regularly offers as a nightcap. Alexis Smith also stars as a predatory neighbor who becomes the object of Geoffrey's thirst for feminine variety.

A psychopathic artist has a penchant for painting portraits of his wives as "The Angel of Death" and then poisoning them.

While vacationing in Scotland, artist Geoffrey Carroll meets and falls in love with an heiress named Sally. However, there's one problem: Geoffrey's wife back home in London. So Geoffrey solves this dilemma the only way he knows how -- by poisoning her.
That's not the end of the story, though. After marrying Sally, the psychopathic painter falls for yet another woman, and so decides to commit murder again. However, before Geoffrey can do the evil deed, Sally grows wise to his scheme. Now she has to find a way to escape from his clutches...

Family Interaction | Psychos | Suspense | Thriller | Murder | Art / Artists | Theatrical Release
This product is made-on-demand by the manufacturer using DVD-R recordable media. Almost all DVD players can play DVD-Rs (except for some older models made before 2000) - please consult your owner's manual for formats compatible with your player. These DVD-Rs may not play on all computers or DVD player/recorders. To address this, the manufacturer recommends viewing this product on a DVD player that does not have recording capability.