Rolling Stone: 3 stars out of 5 - "...The album came to grips with current trends such as metal and hardcore....A masterpiece of Eighties activism, from the gut..." 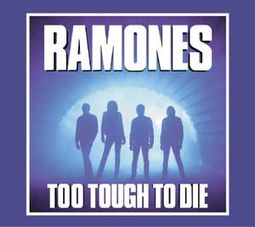 Ramones: Joey Ramone (vocals); Johnny Ramone (guitar); Dee Dee Ramone (bass); Marky Ramone (drums).
Producers: Tommy Erdelyi, Ed Stasium, David A. Stewart.
Recorded at Media Sound, New York, New York. Includes liner notes by Billy Altman.
All tracks have been digitally remastered.
With TOO TOUGH the Ramones take on the '80s, and the '80s go down with a second round TKO. After a few fallow years and some substandard albums (by the band's standards anyway), they came rushing back into the ring with a fresh sense of purpose. The addition of new drummer Ritchie Ramone and the return of long-lost brother Tommy (who sat in as producer along with original engineer Ed Stasium) doubtlessly added some fuel to the fire, creating this punchy, revved-up, and highly worthy addition to the Ramones' catalogue.
TOO TOUGH finds the Ramones expanding their musical palette further than usual, adding crunchy metal riffs to the title song and "I'm Not Afraid of Life," while "Howling at the Moon (Sha-La-La)" adds new wave keyboards courtesy of the Eurythmics' Dave Stewart. The adventurous Dee Dee takes center stage for two hardcore songs, "Endless Vacation" and the manic "Wart Hog," giving Joey a brotherly run for his money. The best example of a Ramones formula song, "Durango 95," was destined to become the band's concert intro song. TOO TOUGH is proof positive that the words "punk" and "longevity" can go together in the same sentence.