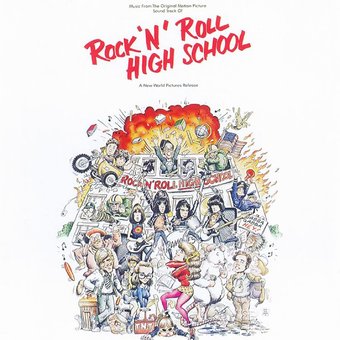 Principally recorded at The Roxy, New York, New York and at Cherokee Recording Studios, Hollywood, California.
The Ramones' cult-classic movie was perfectly complemented by its soundtrack. Of course, there are Ramones songs -- "I Want You Around," "Come On Let's Go" (with the Paley Brothers), "Rock 'n' Roll High School," and a medley that featured "Blitzkrieg Bop," "Teenage Lobotomy," "California Sun," "Pinhead," and "She's the One" -- but the soundtrack also includes songs by Nick Lowe ("So It Goes"), Devo ("Come Back Jonee"), Chuck Berry ("School Days"), and Eddie & the Hot Rods ("Teenage Depression"). A blissfully teenage album, the only dud is actress P.J. Soles' rendition of "Rock 'n' Roll High School" -- but then again, that was the worst part of the film, too. ~ Gina Boldman