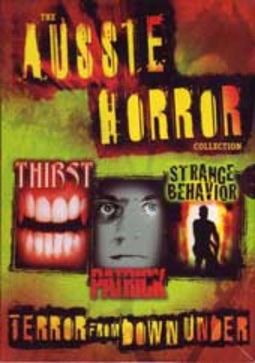 Three Aussie horror films are contained in this boxed set, including:

PATRICK - Having killed his mother and her lover, Patrick lies unconscious is a hospital ward. A nurse, who is witnessing some brutal events in her own life, senses that Patrick is trying to communicate with her, leading to some chilling discoveries.

THIRST - A cult kidnap a young girl and strand her in a foreign village. A strange ritual awaits her, involving her marriage to the cult leader, who forces her to help him satiate his desire for blood.

STRANGE BEHAVIOR - Local teenagers are being bumped off by a shadowy serial killer, with only Officer John Brady seemingly capable of piecing together the mystery.

Patrick - After violently murdering his mother and her lover, young Patrick lays comatose in a small private hospital. When a pretty young urse, just separated from her husband, begins working at the hospital, she senses that Patrick is trying to communicate with her while others in her life are being killed in most mysterious ways. Thirst - She was innocent, pure and unsuspecting. But now, Kate Davis has been kidnapped by a bloodthirsty cult and taken to a remote village. Once there, she discovers her fate. According to the prophecies of the Hyma Brotherhood, she must fulfill her destiny by marrying their leader and helping them quench their diabolical thirst for blood. Strange Behaviour - A brutal serial killer begins a terrifying campaign targeting local teens. Officer John Brady is drawn to the high school's psychology department where he suspects he will find the killer. There is something sinister about the department's research into behavioral control and Brady is determined to uncover it.

Customer Rating:
Based on 16 ratings.


The Aussie Horror Collection is an essential boxset for the horror fan, Australian cinema buff, or simply the adventurous film-viewer.

All three films in this set are classics (in Oz) produced by Anthony Ginnane, who is sort of the Australian Val Lewton. The late 70s and early 80s was a period of a cinematic Renaissance in Australia, and Ginnane was the man behind its horrors and thrillers, all well-directed, well-acted, well-shot.

All editions are widescreen, from exceptional prints; and each disc contains an audio commentary. The commentary on Strange Behavior is particularly enjoyable, as members of the cast have been reunited with writer Bill Condon (Oscar winning writer of Dreamgirls, oddly enough).

Thirst is a brilliant, serious vampire film about a group of high-tech vampires, who live peacefully in communes with human 'blood-cows' for nourishment, attempting to persuade a descendant of Countess Bathory to join them. The box set would be worth it for Thirst alone. 5/5

Patrick is a strange combination of Carrie and Psycho, involving a disturbed comatose man with psychokinesis and a crush on his nurse. It's quite creepy and moves along at a good pace. 4.5/5

Strange Behavior is a slightly tongue-in-cheek slasher that quickly turns into a 50s-tribute mad scientist movie. It's quite fun. 3.5/5

For the price, this set is an incredible steal. I recommend you grab these little-seen gems from Oz while you can.

36%off
The Shadow Knows: 34 Scary Tales from the Vaults of Horror
$7.70 Super Savings
Add to Cart