Get email alerts for Skid Row
98 ratings
Out of Print: Future availability is unknown
Notify Me When Available
Add to Wishlist
Format:  CD
sku:  32WJQ
Related products:
Mötley Crüe: Greatest Hits for $13.60
Skid Row: Slave To The Grind for $12.10
The Best of Warrant for $8.20
Cinderella: Night Songs for $13.60
Cinderella: Long Cold Winter for $9.98
92% recommend us! 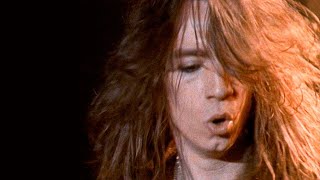 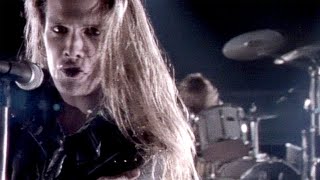 Q - 5/95, p.132
3 Stars - Good - "...this debut still stands as a bracing fusion of street smart riffage, riddled with commercial hooks....Not quite a classic but certainly a notable debut."
Mojo (Publisher) - 11/00, p.116
"...Their sound coalesced around Moore's burn-up blues guitaring....Cream, Allman Brothers and Hendrix are obvious influences....[they] had a spare intensity all their own..."

Skid Row: Sebastian Bach (vocals); Dave "The Snake" Sabo, Scotti Hill (guitar); Rachel Bolan (bass); Rob Affuso (drums).
Recorded at Royal Recorders, Lake Geneva, Wisconsin.
Personnel: Dave "The Snake" Sabo (guitar).
Audio Mixer: Michael Wagener .
Recording information: De-Lane Lea Studios, London, England; Royal Recorders, Lake Geneva, WI.
Unknown Contributor Roles: Rachel Bolan; Rob Affuso; Scott Hill; Sebastian Bach.
The material on Skid Row is mostly typical pop-metal fluff, but since Skid Row was one of the hardest bands to find commercial success during the hair metal fad, the songs sound angrier and more aggressive than the lyrics and hooks might indicate. Part of this is due simply to the musical talent in the band, and part of it is due to vocalist Sebastian Bach; his tendency to oversing actually gives some much-needed nasty attitude to most of the songs, and when the music does match those sentiments (i.e., "Youth Gone Wild"), the results fulfill, rather than merely hint at, Skid Row's potential. But the melodies and songwriting are pretty consistent throughout the album, even if they aren't as close to true heavy metal as they sound. The hit power ballads "18 and Life" and "I Remember You" are musically generic, but Bach's over the top delivery makes them guilty pleasures as well. ~ Steve Huey