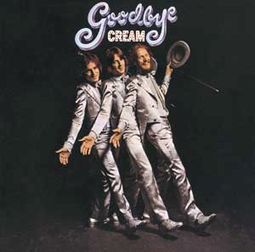 Cream: Eric Clapton (vocals, guitar); Jack Bruce (vocals, piano, organ, bass); Ginger Baker (vocals, drums, percussion).
Additional personnel: L'Angelo Misterioso [George Harrison] (guitar); Felix Pappalardi (viola, piano, Mellotron, bass).
Engineers: Bill Halverson, Adrian Barber, Damon Lyon-Shaw.
Personnel: Eric Clapton (vocals, guitar); Jack Bruce (vocals, harmonica, piano, organ, keyboards); Ginger Baker (vocals, drums, percussion); George Harrison (guitar); Felix Pappalardi (viola, piano, Mellotron).
Photographer: Roger Philips.
Arranger: Robert Stigwood.
After less than 3 years in existence, and some 15 million albums sold, GOODBYE was Cream's farewell release. Baker, Bruce and Clapton indicated at the time that they were burned out on the concept, the touring, the improvisational "battles," and each other. The live cuts ("I'm So Glad," "Politician" and "Sitting On Top Of The World") are indicative of how the band's concert chemistry had evolved from earlier live recordings (such as those on WHEELS OF FIRE and LIVE CREAM, VOLUMES 1 & 2).
But what's most striking about GOODBYE is the charm and craftsmanship of their last studio tracks, indicating that Cream was far from played out creatively, and illustrating how strong their songwriting skills really were. The Beatles' influence is readily apparent on each studio track, the most famous being Clapton's "Badge," featuring George Harrison. Bruce's "Doin' The Scrapyard Thing," with its mixture of funk and the English music hall, points to the directions he would pursue on SONGS FOR A TAILOR and his other underrated solo albums, while Baker's use of odd meters on "What A Bringdown" anticipates "Do What You Like" on BLIND FAITH.

43%off
Joe Walsh
The Smoker You Drink, The Player You Get (CD)
$8.60 Super Savings
Add to Cart

49%off
Lynyrd Skynyrd
Gimme Back My Bullets (CD)
$8.60 Super Savings
Add to Cart