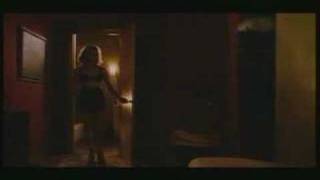 "You can never, ever ask me to stop drinking."
- Ben (Nicolas Cage), to Sera (Elizabeth Shue)

With LEAVING LAS VEGAS, director Mike Figgis spun critical gold out of what would appear to be a maudlin and hackneyed premise--a down-and-out drunk meets a hooker with a heart of gold. The reason for the film's success lies partly in its refusal to moralize, but mostly it is the strong performances of Nicholas Cage and Elisabeth Shue that make the story believable and poignant. Ben Sanderson (Cage) is a Hollywood screenwriter who has become an alcoholic. After being fired, he takes his severance pay to Las Vegas, where he plans to drink himself to death. There he meets Sera (Shue), a streetwise prostitute who responds both to Ben's wild antics and to his absolute gentleness. What Sera needs most is to be needed, and Ben needs her a lot. Figgis uses his whole bag of tricks--Sera talks to the camera, the exteriors are shot in grainy 16mm--but finally it is the perfectly-conceived relationship between these two wounded people that drew the rave reviews. The film was based on a novel by John O'Brien.

An alcoholic movie executive who loses his wife, his family and his job decides to drive to Las Vegas and commit suicide by drinking himself to death in this acclaimed adaptation of the late John O'Brien's 1991 autobiographical novel. In Vegas, he meets a nearly equally pathetic young hooker and the two develop a strange, moving bond while waiting for him to die.