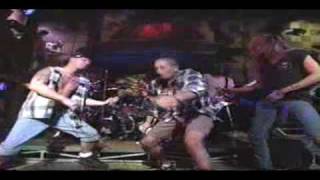 Skid Row: Sebastian Bach (vocals); Dave "The Snake" Sabo, Scotti Hill (guitar); Rachel Bolan (bass); Rob Affuso (drums).
Additional personnel: Rob Halford, Taime Down (vocals).
Producers: Skid Row, Jim Mitchell, Michael Carver, Bruce Calder.
B-Sides Ourselves was intended to be a stopgap EP, but it turned out to be Skid Row's last recording for three years. It wasn't a bad way to step away from the spotlight, actually. A collection of five covers, B-Sides Ourselves ranks among the best music Skid Row ever recorded, simply because it's so raw and seething with energy. Produced by the band, the EP careens through the songs -- including selections by Kiss and the Sex Pistols -- at a breakneck pace, creating vicious rock & roll that is more vital than their two previous albums. The band managed to harness that power and put it into their original material on their next album, 1995's Subhuman Race. ~ Stephen Thomas Erlewine