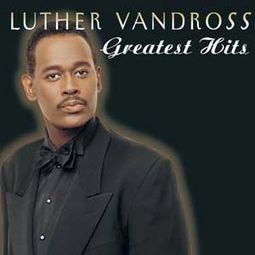 Personnel includes: Luther Vandross, Gregory Hines, Dionne Warwick (vocals).
Producers include: Luther Vandross, Marcus Miller, Jacques Fred Petrus, Walter Afanasieff.
Compilation producer: Leo Sacks.
Includes liner notes by Brian Chin.
Digitally remastered by Joesph M. Palmaccio (Sony Music Studios, New York, New York).
GREATEST HITS contains all the sultry, soulful ballads and upbeat grooves that Mr. Vandross has trademarked for the past quarter-century. Only Barry White can rival Luther when it comes to bedroom classics.
"Never Too Much" was the smoothly arranged dance smash that introduced the world to Luther. Slow jams such as "Don't Want to Be a Fool" and "Here and Now" fit perfectly alongside faster gems like "Power of Love/Love Power" and "Love the One You're With." Luther's beautiful vocals blend melodiously on the fantastic duets "There's Nothing Better Than Love" (with Gregory Hines), "How Many Times Can We Say Goodbye" (with Dionne Warwick), and "The Best Things in Life Are Free," where he and Miss Janet deliver a memorable hook. A passionate collection including 10 Top 10 singles, GREATEST is the cream of the crop from one of pop/R&B's unique voices.

Babyface
A Collection of His Greatest Hits
$6.70 Super Savings
Add to Cart

Luther Vandross
Dance With My Father (CD)
$7.80
Add to Cart

Luther Vandross
One Night with You: The Best of Love, Volume 2 (CD)
$6.50 Super Savings
Add to Cart