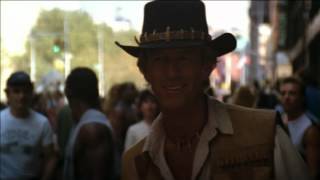 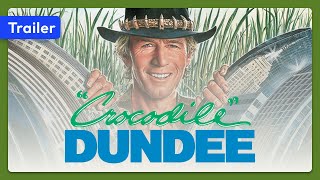 Sue Charlton (Linda Kozlowski), a reporter for Newsday, travels Down Under to write a feature on Australia and its people. She gets a tip to visit a free-spirited bush ranger who was attacked by a crocodile, which he then killed with his bare hands. So Sue heads into the red sands and squalid swamps of Northern Territory outback to a tiny fly-blown burg called Walkabout Creek, where she is greeted by Wally (John Meillon) of Never-Never Safaris. Wally takes her to the pub to meet the infamous Michael J. "Crocodile" "Mick" Dundee (Paul Hogan), who charms her with his swagger and grit. He offers to lead her though the bush, as she's "just a Sheila," to where he was attacked. This comment raises her city-girl feminist hackles and she strikes out alone. But when Mick saves her from the grasp of a toothy reptile, she ducks under his wing and into his heart, and invites him to return with her to New York City. Here in the sophisticated urban jungles of Manhattan, the bushman has finally met his match, as he endures New York streets of the 1980s, filled with drug dealers, muggers, transvestites, and prostitutes. Sue finally gets more than just a story as the "wonder from down under" rocks the Big Apple to its core.