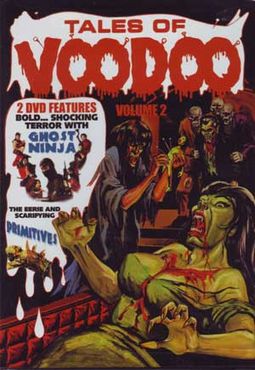 More of the strangest exploitation movies from around the world are collected in TALES OF VOODOO V.2: PRIMITIVES and GHOST NINJA.

Made to cash in on the then popular cycle of cannibal-themed action-horror films, 1978's PRIMITIVES is a campy jungle adventure movie. A group of college students travel to the jungle with the hopes of witnessing the activities of the primitives that live there. After meeting one group, they decide to venture deeper into the depths of the wilderness, seeking the "true primitives." But when they discover another tribe there, the habits of this group makes the students wish they had never come to the jungle at all. PRIMITIVES features popular Indonesian actor Barry Prima in one of his first roles.

Kung-fu combines with the horror of the undead in GHOST NINJA. The deadly shadow warriors commit the ultimate sin by raising the dead in order to augment their forces, embarking on a campaign to defeat their enemies and rule the land with an iron fist. Can anyone stop their evil plan'

Igor and the Lunatics (DVD)
$7.10 Super Savings
Add to Cart