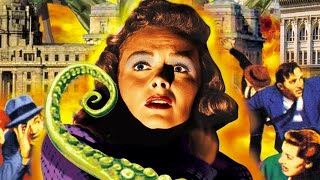 In the not-too-distant future, Daniel Davis returns from the war to his hometown where he witnesses a bizarre series of grotesque murders with no apparent motive. His sanity is tested by his discovery. Mutated by global warming, unspeakable sea creatures have gained super intelligence and the ability to travel on land. They are invading human brains, contaminating mass-produced foods with their eggs, while giant tentacled monsters are emerging from the sea, laying waste to our cities. Their goal - the complete annihilation of mankind!

Sixteen-year-old director Joshua Kennedy's Attack Of The Octopus People is a knowledgeable tribute to classic horror and sci-fi movies of the fifties with references to the works of Ray Harryhausen, Roger Corman, William Castle and countless others. Joshua compensates with creativity, the shortcomings of budget that challenge budding filmmakers. At age five, he directed It Came From The Bathroom and is currently at work on his latest creation, Curse Of The Insect Woman.

Bonus: Frankenstein Vs. Hitler: "Who wins when evil fights evil?" The Fuhrer is resurrected to battle it out with Frankenstein's monster for the German World Championship of Evil in this hilarious spoof. Stars Timmy Timkoko, Yahuba Daly, Dash Titan; directed by Ace Fronton.

Customer Rating:
Based on 42 ratings.


Attack Of The Octopus People (2010)
Joshua Kennedy's debut feature is an ode to classic sci-fi films of the 1950s and beyond, filmed during his teenage years, with a cast populated by his family and friends, and everyone looks like they're having a lot of fun. Although the picture features references to movies like The Tingler and It Conquered The World and a soundtrack assembled from the film scores of composer Herman Stein, the story is an original one, and what Kennedy lacks in his limited budget, he makes up for in the exuberance of the film, which launches octopus toys and puppets across the screen with all the seriousness of a creature feature filmed on the Universal-International lot.

A lot of us played around with movie cameras at a young age, but few probably put together anything like this film, which is impressively edited and never drags. The sets may be primarily rooms at Kennedy's house or school, with furniture sometimes hidden behind hanging sheets, and computer printouts standing in for official signs, but I didn't care, as Josh's strong narrative sense propels the story along. All the hallmarks of the 1950s features are here, from the prologue that introduces us to Josh Palacios' well-spoken villain, the sweet romance between Kennedy's hero and love interest Negrete, the eerie focus on the octopi bursting from their captive containers, introductions of suspicious characters like Kat Kennedy's cantankerous hotel manager, and the crowds running in terror once the sea creatures take to the streets.

Yes, the special effects are not very convincing, and the octopus props not all that effective, and a few scenes would have benefitted from some post-dubbing, but that doesn't negate the impressiveness of this accomplishment for a boy of Kennedy's age.

Kennedy's plea to a frightened theater audience, lifted almost verbatim from a Vincent Price film, shows off his fine rich voice which would be a definite asset in his later films, and friends of Josh should smile at a sequence in which he manages to share the screen with one of his cinema heroes. It's not many who can capture their childhood in a piece of work that manages to last, but I think he'll look back on this work fondly for years to come.

Greatest Movie In The History Of Time. Movie Lover: The mother of the actor who played Glen from USA -- September, 27, 2011


I love this movie so much, The director is so awesome, and he did such a great job in showing the true essence of classic B-movies. All the actors were great, but the one who played Glen was amazing. His performance was just breath-taking, and i cant wait to see him in other roles.

25%off
Mr. Lobo's Cinema Insomnia: The Screaming Skull
$5.95 on Sale
Add to Cart