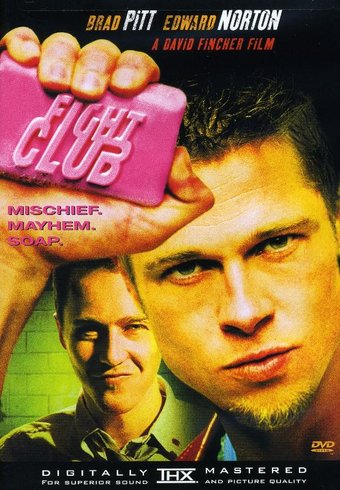 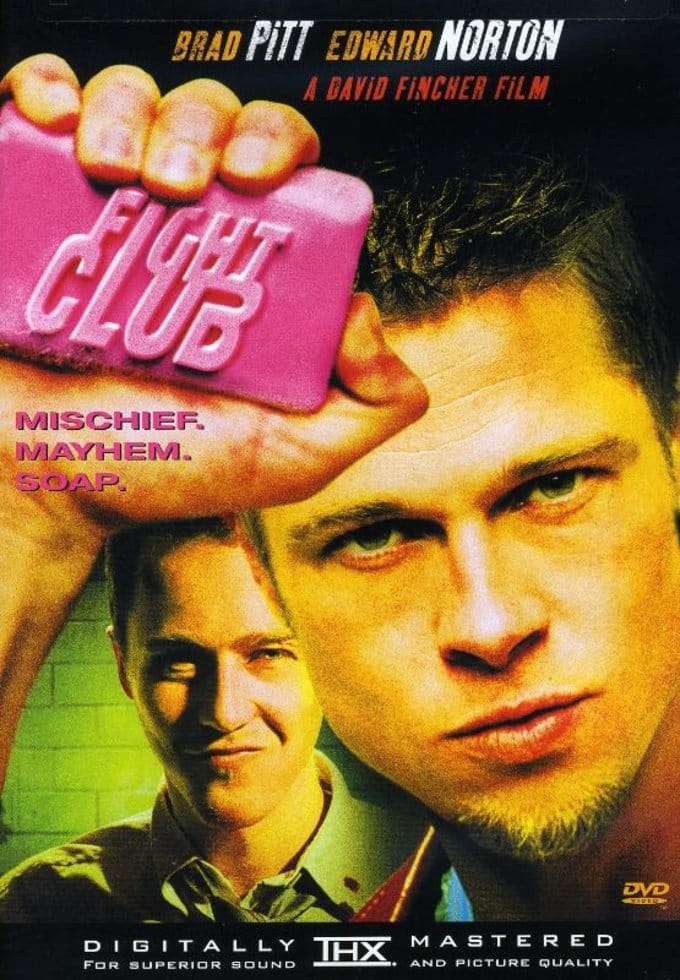 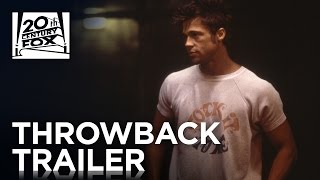 "Tyler, you are by far the most interesting single serving friend I have ever met. [Pauses] See, I have this thing...everything on a plane is single serving..."--Narrator (Edward Norton) to Tyler (Brad Pitt)
"Oh, I get it. It's very clever."--Tyler
"Thank you."--Narrator
"How's that working out for you'"--Tyler
"What'"--Narrator
"Being clever."--Tyler
"Great."--Narrator
"Keep it up then."
- Tyler
"I say never be complete. I say stop being perfect."
- Tyler
"The things you own end up owning you."
- Tyler
"I want you to do me a favor."--Tyler to Narrator
"Yeah, sure."--Narrator
"I want you to hit me as hard as you can."--Tyler
"What'"--Narrator
"I want you to hit me...as hard as you can."
- Tyler
"After fighting, everything else in your life got the volume turned down. You could deal with anything."
- Narrator, in voice-over
"I am Jack's smirking revenge."
- Narrator, in voice-over
"Gentlemen, welcome to Fight Club. The first rule of Fight Club is you do not talk about Fight Club. The second rule of Fight Club is...you do not talk about Fight Club."
- Tyler
"You have to consider the possibility that God does not like you. He never wanted you. In all probability, he hates you."
- Tyler to Narrator
"It's only after we've lost everything that we're free to do anything."
- Tyler
"The first one through this door gets a...gets a lead salad!"
- Narrator, as he waves a gun at police officers
"I am Jack's complete lack of surprise."
- Narrator, in voice-over

FIGHT CLUB is narrated by a lonely, unfulfilled young man (Edward Norton) who finds his only comfort in feigning terminal illness and attending disease support groups. Hopping from group to group, he encounters another pretender, or "tourist," the morose Marla Singer (Helena Bonham Carter), who immediately gets under his skin. However, while returning from a business trip, he meets a more intriguing character--the subversive Tyler Durden (Brad Pitt). They become fast friends, bonding over a mutual disgust for corporate consumer-culture hypocrisy. Eventually, the two start Fight Club, which convenes in a bar basement where angry men get to vent their frustrations in brutal, bare-knuckle bouts. Fight Club soon becomes the men's only real priority; when the club starts a cross-country expansion, things start getting really crazy.

Like Tyler Durden himself, director David Fincher's FIGHT CLUB, based on the novel by Chuck Palahniuk, is startlingly aggressive and gleefully mischievous as it skewers the superficiality of American pop culture. Outstanding performances by Norton and Pitt are supported by a razor-sharp script and an arsenal of stunning visual effects that include computer animation and sleight-of-hand editing. One of the most unique films of the late 20th century, FIGHT CLUB is a pitch-black comedy of striking intensity.