A River Runs Through It PG 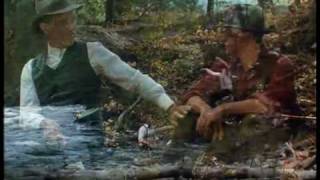 A River Runs Through It Trailer

Fly-fishing figures prominently in this poignant tale of two brothers growing up in Montana in the early 20th century under the stern rule of their minister father. While both boys rebel, Norman (Craig Sheffer) channels his rebellion into writing, but Paul (Brad Pitt) descends onto a slippery path of self-destruction. The beautiful scenery of Montana is used to full effect with the awesome cinematography of Philippe Rousselot. Directed by Robert Redford, this adaptation of Norman Maclean's classic autobiography also features Tom Skerritt and Brenda Blethyn as the Reverend and Mrs. Maclean.

An adaptation of Norman Maclean's much-loved autobiographical novella about fly-fishing and familial relations, A RIVER RUNS THROUGH IT is set in the pristine Montana wilderness of the early 20th century. The story traces the relationship between two brothers growing up in an emotionally constricted household headed by a Presbyterian minister. The scholarly Norman (Craig Sheffer) follows in the footsteps of his stern, stoic father, going to college, marrying, and settling down. His brother, Paul (Brad Pitt)--daring, handsome, and athletic--chooses the more glamorous career of newspaper journalist. These two very different brothers are brought together through the years by a mutual love of fly-fishing instilled in them by their unyielding father. As Norman watches his brother's seemingly charmed life dissolve under the influences of gambling and alcohol, the art of fly-fishing becomes a poignant metaphor for the love their father was unable to express in any other way. Robert Redford (ORDINARY PEOPLE, THE HORSE WHISPERER) directs a first-rate cast including Tom Skerritt, Brenda Blethyn, and Emily Lloyd in this subtle yet poignant portrait of a family in the early 1900s.