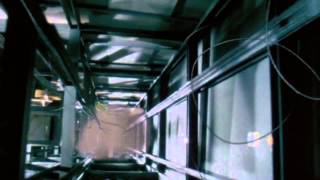 The Umbrella Corporation's Vault, a secret facility located deep below Raccoon City, is sabotaged and a deadly virus is stolen. In the mansion that conceals another entrance to the Vault, Alice (Milla Jovovich) lies on the shower floor, naked except for the shower curtain. She can't remember anything but, as she dresses, she recalls memory fragments. Then, masked intruders burst through the windows. They tell Alice she is a Corporation agent living undercover in the mansion. She goes with them into the Vault to discover who sabotaged it. As they penetrate the Vault, trying to get to the Red Queen, the computer system at the heart of the facility, Alice and her confederates face many horrors--dead bodies suspended in water, blood-red flayed dogs, flesh-eating zombies, and "the Licker," a dynamically mutating monster.

Basing RESIDENT EVIL on the popular video game, writer-director Paul W.S. Anderson delivers a tense, exciting science-fiction/horror film. Anderson and director of photography David Johnson shot the movie in rich silver-and-black, so that its few bursts of color are striking--like the image of the blonde Milla Jovovich in a very short crimson dress, with a trailing veil, and black boots dragging a silver axe behind her.

The Master of Disguise (DVD)
$9 Super Savings
Add to Cart

53%off
Oprah Winfrey Presents Mitch Albom's For One More Day (DVD)
$6.99 on Sale
Add to Cart