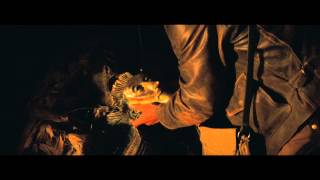 Indiana Jones and the Kingdom of the Crystal Skull - Trailer 2

Harrison Ford dusts off his infamous brown fedora for another Indiana Jones film, which is once again made by Steven Spielberg and George Lucas. The year is 1957, and Indy is on the run from a team of Russian spies led by a rapier-wielding Irina Spalko (Cate Blanchett). The Russians want Indy to help them locate an ancient artifact that they believe can be used as the ultimate military weapon. Indy manages a narrow escape, and tries to return to his life as a professor of archaeology, but he soon bumps into a '50s greaser named Mutt (Shia LeBeouf). Mutt's mother as well as one of Indy's longtime friends have been captured somewhere in Peru. Mutt and Indy hop a plane, where they manage to track down both Mutt's mother, Marian (Karen Allen), and Professor Oxley (John Hurt), but they also find themselves surrounded by the same scheming Russians. The Russians have found the artifact they were seeking, but Indy now knows its secret and dangerous powers. With the help of Mutt, Marian, and Oxley, he races to return it to its rightful resting place.

While a bit more grizzled than the last time we saw him cracking his whip, Ford still manages to bring the right mix of humor and swagger to Indy. Longtime fans are sure to love the many inside jokes and nods to the previous films, as well as the reappearance of some favorite old characters. While CRYSTAL SKULL has the same exotic locales and wild chases of the earlier movies, it definitely sets itself apart with its heavy use of CGI. The visuals are indeed impressive, but some might feel something is lost when Indy can outrun an atomic bomb just as easily as he can a swarm of carnivorous ants. This modern-day Indy is easy entertainment with some fun surprises, but it will likely divide diehard fans right down the middle.

Raiders of the Lost Ark
$12.50 Super Savings
Add to Cart

Indiana Jones and the Temple of Doom
$13 Super Savings
Add to Cart
(1.1+ Million)