There is a way to be good again. 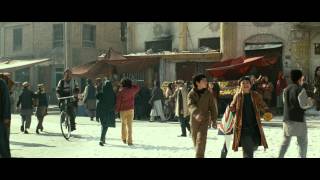 Based on the international bestseller by Khaled Hosseini, THE KITE RUNNER is a fascinating historical epic set in 20th-century Afghanistan. In 1978, Amir (Zekiria Ebrahimi) and Hassan (Ahmad Khan Mahmoodzada) are young boys living in Kabul, where Hassan and his father, Ali (Nabi Tanha), work as servants for Amir and his father, Baba (Homayoun Ershadi). Amir and Hassan make an excellent team in kite competitions, with Hassan having a gift for running down kites, but after one contest, he is bullied by Assef (Elham Ehsas), who does unspeakable things to him as Amir watches from a distance and then runs away, not helping his friend. As the Russians and then the Taliban take over Afghanistan, Baba and Amir escape to America, where they make a new home in San Francisco. But even as he graduates from college and meets a beautiful young woman, Soraya (Atossa Leoni), who is also from Kabul, Amir (now played by Khalid Abdalla) is haunted by his cowardice and can't turn down an opportunity to try to make things right when it is offered by his father's old friend Rahim Khan (Shaun Toub)--even if it means risking his life. THE KITE RUNNER was adapted for the screen by David Benioff (THE 25TH HOUR), with much of the dialogue spoken in Dari, one of the primary languages in Afghanistan. Director Marc Foster (MONSTER'S BALL, FINDING NEVERLAND) does a deft job navigating the complicated story, which moves from Afghanistan to San Francisco and Pakistan (with much of the film actually shot in China), using many nonprofessional actors and a subtle score composed by Alberto Iglesias. Ebrahimi and Mahmoodzada make impressive debuts, with solid work by Abddalla, Leoni, and especially Ershadi.

Not Without My Daughter (Blu-ray)
$19
Add to Cart

Kandahar: Journey into the heart of Afghanistan
$28
Add to Cart