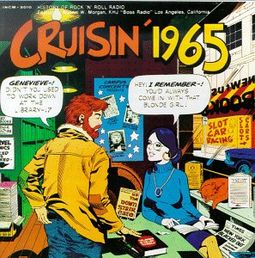 An instantly recognizable bargain bin staple since the late '70s, thanks to their colorful comic book covers tracing the romantic life of an Everycouple named Peg and Eddie, the Cruisin' series of discs are built on a brilliant concept: each disc is devoted to a single year, with hit songs, local commercials, station jingles, and news headlines all presided over by a noted DJ from the era for a near-perfect re-creation of that year's AM radio experience. Hosted by Robert W. Morgan of KHJ "Boss Radio" in Los Angeles, CA, Cruisin' 1965 dips into the folk-rock waters of that year with the Turtles' superlative reworking of Bob Dylan's "It Ain't Me Babe" and Barry McGuire's now campy as all get out faux-protest song "Eve of Destruction." Otherwise, though, the R&B focus of most volumes in the Cruisin' series remains in place; highlights include the Ramsey Lewis Trio's funky soul-jazz instrumental version of "The in Crowd," which plays up the tune's obvious similarities to the Capitols' earlier hit "Cool Jerk," and Barbara Mason's lovely "Yes I'm Ready." Cruisin' 1965 is a pivotal entry in the series, marking the first use of a several-years-old song introduced as a golden oldie. (In this case, it's Chuck Berry's "Sweet Little Sixteen.") As the series progresses through the latter half of the 1960s, more and more golden oldies would appear, as some of the bigger hits of 1966-1970 don't really fit vibe the series producers were going for. ~ Stewart Mason