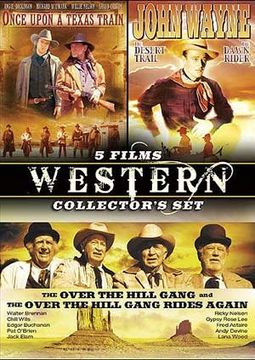 As issued by Echo Bridge Home Entertainment, this collection presents five westerns produced between 1935 and 1988. It opens with the telemovie ONCE UPON A TEXAS TRAIN, which finds parolee Willie Nelson teaming up with his old posse to rob a locomotive, and pursued by determined lawman Richard Widmark. The set then includes two John Wayne vehicles from the 1930s: THE DAWN RIDER (1935) - with Wayne as a young man intent on pursuing the homicidal thief who murdered his father - and THE DESERT TRAIL - with Wayne as an unfortunate character who gets framed twice, first for murder and then for robbery. The set concludes with two made-for-television comedy westerns: the 1969 comedy western THE OVER-THE-HILL GANG and its 1970 sequel, THE OVER-THE-HILL GANG RIDES AGAIN, each one about an elderly group of ex-Texas Rangers who attempt to thwart the villains intent on taking over their town.

25%off
Harry Carey Double Feature: The Night Rider / Without Honor (DVD)
$5.95 on Sale
Add to Cart