Rick Wakeman Out There (With the New English Rock Ensemble) 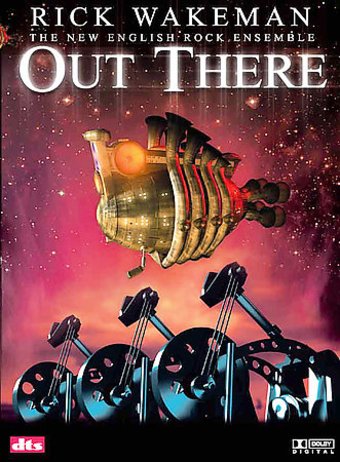 Out There - The Concept: The Story Behind The Making Of The Album and the Subsequent Live Tour

Rick Wakeman's return to YES in June of 2002 coincided with the completion of the recording of Out There, his first progressive rock album with his own band for 26 tears. In true Wakeman tradition, "Out There" is a musical concept continued from where he left off in 1976 with his quest for the origins of all music with "No Earthly Connection" which sold in excess of five million copies worldwide. The highly anticipated concept movie Out There has been crafted together with high-end computer graphics, studio recordings and outstanding footage from the vaults of the NASA archives to create this, the very first, 'Progressive Rock DVD Album', presented in crisp three-dimensional sound.

6 tracks including "Out There," "The Mission," "To Be With You," "Universe Of Sound," "Music Of Love" and "The Cathedral Of Sound."

This DVD package is a 21st-century audio-visual interpretation of the prog rock album OUT THERE by Rick Wakeman & the New English Rock Ensemble. The film features computer-generated graphics and included tracks such as "The Mission," "To Be with You," "Universe of Sound," "The Cathedral of the Sky," and more.


Great sounding disc. The video is, well, BAD! I have better home movies! Thankfully it's the music I got it for. So, turn off the TV, sit back and enjoy the music.