The Wire: "[H]ere, heavy rock is turned inside out, drained of its claustrophobia and set loose over a verdant landscape." 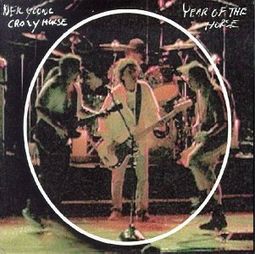 Rolling Stone - 6/26/97, p.54
3 Stars (out of 5) - "...rough-and-tumble roots grunge with a predilection for grand gestures. Guitars never riff when they can soar; songs don't end when they can extend..."
Spin - 9/97, p.156
8 (out of 10) - "...On the double CD YEAR OF THE HORSE, he mans the stadium burp gun for 84 bloated, bitchin' minutes, and makes every bum note huggable....YEAR OF THE HORSE gives neglected guitar epics from ZUMA and BROKEN ARROW extra minutes of Jurassic life..."
Entertainment Weekly - 6/20/97, p.74
"Middle-aged hippie musicians should be forbidden to release live double CDs of sloppy, jam-oriented rock--unless they happen to be Young and Crazy Horse....HORSE isn't an essential addition to his canon, but it's a welcome one." - Rating: B+
The Wire - pp.48-49
"[H]ere, heavy rock is turned inside out, drained of its claustrophobia and set loose over a verdant landscape."

Neil Young & Crazy Horse: Neil Young, Poncho Sampedro (vocals, guitar); Billy Talbot (vocals, bass); Ralph Molina (vocals, drums, percussion).
All tracks have been digitally mastered using HDCD technology.
Personnel: Neil Young (vocals, guitar).
Audio Mixer: Tim Mulligan.
Recording information: Agridome, Regina, Saskatchewan, Canada (1996); Cal Expo, Sacramento, CA (1996); Jones Beach, Long Island, NY (1996); Molson Park, Ontario, Canada (1996); Shoreline, Mountain View (1996); The Catalyst, Santa Cruz, CA (1996); The Forum, Los Angeles, CA (1996); The Meadows, Hartford, CT (1996); Waldebuhne, Berlin, Germany (1996).
Photographers: L.A. Johnson ; Jim Jarmusch.
The first thing you hear on this two-disc live album is Young's voice wryly asserting that "It all sounds the same...It's all one song." While this self-effacing assessment of the Young/Crazy Horse oeuvre echoes the feeling of many critics, on YEAR OF THE HORSE, recorded in several cities during the band's 1996 world tour, nothing could be further from the truth.
Young's caveman-on-acid guitar solos and the primal fury of Crazy Horse can still topple mountains. And Young's choice of material leans more toward obscure gems like "When Your Lonely Heart Breaks" from the under-rated LIFE than played-out hits like "Cinnamon Girl." While they never sound like anything other than Crazy Horse, the band switches easily from an acoustic, bluesy "Mr. Soul" to the loping lament of "Big Time" from 1996's BROKEN ARROW. Within the ostensibly narrow confines of the Crazy Horse palette there exists an entire universe of colors, and on YEAR OF THE HORSE, Young and company explore every shade with all the spirit and energy of a band in their prime.