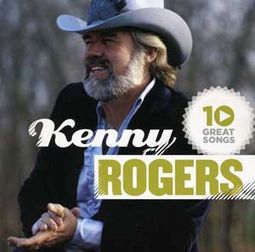 Get email alerts for Kenny Rogers
Currently Out of Stock: We'll get more as soon as possible
Notify Me When Available
Add to Wishlist
Format:  CD
item number:  ZSUR 81805
91% recommend us!

The Kenny Rogers edition in Capitol's 10 Great Songs series has nary a dog in the bunch. These songs are some of the high points in a very long career that wrote perhaps the first chapter in the true transition of country music to pop chart powerhouse, opening the door for dozens of performers and songwriters in their wake. These songs represent the period that Rogers rode the top of the Billboard charts effortlessly after toiling in the fields of the recording industry for more than a decade -- including his years with the First Edition, where he began to establish his reputation as a singer and scored a few hits -- and finally became a superstar. Sure, "The Gambler" is here, as are "Lucille," "Lady," and "Don't Fall in Love with a Dreamer," but so are "Coward of the County," "You Decorated My Life," and "Love or Something Like It." Given the super-budget price tag, this is a good buy for anyone seeking a mixtape of some of Rogers' biggest and best tunes. ~ Thom Jurek

Kenny Rogers
Lucille / The Gambler
$5 on Sale
Add to Cart