Let yourself go... they do!

3.2K ratings
Currently Out of Stock: We'll get more as soon as possible
Notify Me When Available
Add to Wishlist
Format:  DVD
sku:  XMLCR 54157D
92% recommend us! 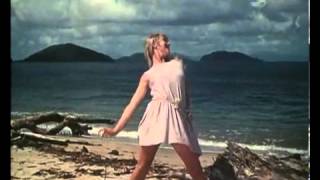 James Mason is Bradley Morahan, an Australian artist far away from home and trying to prod his muse in the bowels of New York City. Disgusted with life in the big city, Bradley decides to return to his roots and heads back home to Australia. Once there, he decides to become a Gauguin primitive and sets up shop on a deserted island on the Great Barrier Reef. To his disappointment, however, he discovers the island is populated by a drunken old harridan (Neva Carr-Glyn) and her attractive granddaughter Cora (Helen Mirren). One look at Cora, and Bradley excitedly begins to mix his pigments, offering Cora a job as his model. Soon enough, Cora goes native and poses for Bradley in the raw. Love is, of course, in the air. But just as things seem to being going fine in every way, Bradley's old friend Nat (Jack MacGowran) appears on the island out of the blue and proceeds to rob Bradley blind. Barely recovered from the theft, Bradley must also deal with an irate grandma, who discovers that Cora has been posing nude for Bradley and has been keeping her earnings hidden from granny. Bradley's island paradise is shattered and he finds he has to deal with an old woman threatening to turn him in to the authorities for having a minor pose naked before him and his easel. The character of Morahan was based on real-life Bohemian artist Norman Lindsay, who later became the subject of John Duigan's SIRENS (1994).