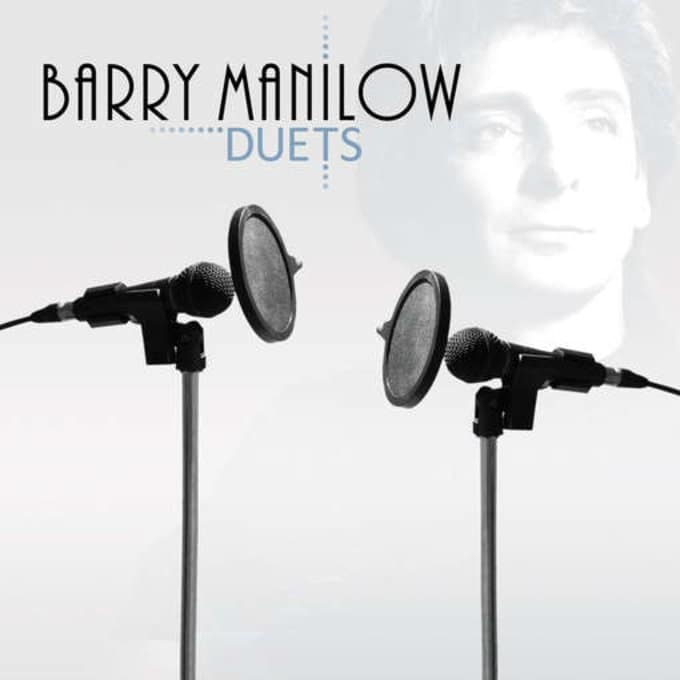 Get email alerts for Barry Manilow
27 ratings
Currently Out of Stock: We'll get more as soon as possible
Notify Me When Available
Add to Wishlist
Format:  CD
item number:  ZSUR 81892
91% recommend us!

Duets is a canny compilation of duets Barry Manilow has recorded over his years at Arista. These 15 tracks span from 1980's Barry to 2008's Greatest Songs of the Eighties, so this isn't quite prime Manilow; in other words, there are no big hits but there are plenty of big names, including Bette Midler, Reba McEntire, Dionne Warwick, Sarah Vaughan, and Barbra Streisand, a cast of characters which also suggests the range of the tunes here. Barry does hold his own singing a torch song with Torm‚, trading lines with Barbra, and proves a good foil for Vaughan, and he's also quite comfortable using the Association as his support on a medley of their hits "Cherish" and "Windy." It should come as no great surprise that most of this is straight down the middle of the road, because that is where Barry is at his strongest, so that makes the inclusion of the wild Kid Creole & the Coconuts duet "Hey Mambo" most welcome: it shows that when he wants to, Manilow can have some knowing fun with his Copacabana persona. ~ Stephen Thomas Erlewine

36%off
Barry Manilow
The Greatest Songs of the Fifties
$6.98 on Sale
Add to Cart

Barry Manilow
Here at the Mayflower
$6.98 on Sale
Add to Cart

91%off
Barry Manilow
This Is My Town: Songs Of New York
$5
Add to Cart

Barry Manilow
Here at the Mayflower
$7.30
Add to Cart

The Crystals
Da Doo Ron Ron: The Very Best of the Crystals (CD)
$8.20
Add to Cart

Barry Manilow
Because It's Christmas (CD)
$9
Add to Cart