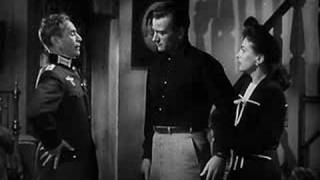 "Paris. May 9, 1940. The ninth night of the ninth month of a war too uneventful to be taken seriously and too far away to worry about," says the opening legend of Jules Dassin's REUNION IN FRANCE. While the indolent French upper class enjoy its nightly entertainment, Michele de la Becque (Joan Crawford) prepares for her vacation in the South of France. However, she is annoyed that her fiancé, government official Robert Cortot (Philip Dorn), won't accompany her: He has defense duties. She goes alone, but her complacency is short-lived. The Germans invade, bypassing the Maginot Line. Michele is caught up in people fleeing their homes. She returns to Paris a changed woman. But Robert has also changed: He's become a Nazi collaborator. So when Michele meets escaping prisoner of war Pat Talbot (John Wayne), it's no surprise that she decides to help him.

Twelve months after the U.S. entered WWII, REUNION IN FRANCE was released. It is an intriguing account of occupied France filmed by director Jules Dassin and director of photography Robert Planck in crisp, clear prenoir images. Wayne gives a good-humored performance, Dorn is secretive and intense, and Crawford goes from haughty complacency to anxious concern.

A spoiled rich woman in Paris believes her fiancee is producing weapons for the Nazis, and so takes up with an American flyer.