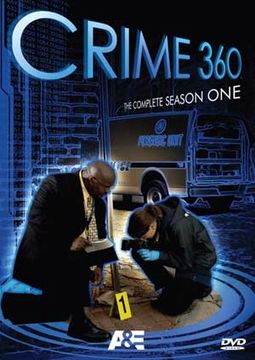 Like a real life CSI, CRIME 360 follows actual crime scene investigators through an entire case, from the moment they arrive on the scene to their astounding conclusions that help bring perpetrators to justice. This groundbreaking series puts viewers inside the labs where high-tech detectives solve crimes using laser scanning, digital photography, and other tools of the forensic examination trade. The exciting season one set features 12 riveting episodes, including the introductory chapter, "Welcome to Homicide."

Real-life crime drama will never be the same. Starting now, with the aid of incredible cutting-edge technology, the hunt for a killer takes on a whole new dimension.
In CRIME 360, the hit investigative series from A&E®, experience actual crime investigations as they unfold, from the moment detectives are called in to work on a case until it is ultimately solved. It's gritty detective work combined with groundbreaking techniques: amazing computer-generated imagery, state-of-the-art 3D laser scanning, and 360-degree digital photography. In each one-hour episode of the three-DVD set, you're on the case with police, detectives, and medical examiners, sifting through evidence and examining forensics from every angle in a way never before possible. Then you're inside the investigation as suspects are interviewed, theories change and graphics evolve until the solution becomes clear. From start to finish, it's all real and all riveting, the perfect combination of human drama and technical wizardry.