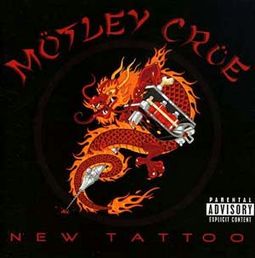 This is an Enhanced CD, which contains both regular audio tracks and multimedia computer files. Enhancements include the "Hell On High Heels" video.
Motley Crue: Vince Neil (vocals); Mick Mars (guitar); Nikki Sixx (bass); Randy Castillo (drums).
The unabashed kings of the L.A. glam metal scene of the '80s, Motley Crue has been delivering its brand of rowdy rock & roll for nearly 20 years. After catering somewhat to the dark, brooding rock of the '90s on GENERATION SWINE, the Motley boys return full tilt to attitude driven, testosterone fueled heavy rock. This album picks up where DR. FEELGOOD left off.
"Hell on High Heels" featuring a big, anthemic chorus and a catchy guitar lick, is a sexy rocker. "Treat Me Like the Dog I Am" takes a punky turn, while the title track is a ballad about a man who celebrates his love for his woman in true rock & roll fashion--her name on his arm. New drummer Randy Castillo's excellent playing is featured on "First Band on the Moon." The album closes with another in a long line of Crue cover tunes, The Tubes' "White Punks on Dope." This killer version fits right in with the sleazy, bratty, party vibe of NEW TATTOO.