Available: Usually ships in 2-5 business days
19 copies available
Add to Cart
Add to Wishlist
Format:  DVD
sku:  JDX9
Also released as:
The Stepford Wives for $6.40
Related products:
The Witches of Eastwick for $12.10
Valley of the Dolls (2-DVD) for $8.40
Bewitched (Includes Bonus DVD with 3 episodes from "Bewitched" TV Show) for $5.98
The Manchurian Candidate for $6.80
Our customers love us! 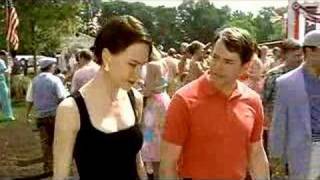 Based on a book by Ira Levin which satirizes the roles of 1950s housewives, this is a remake of the 1975 film adaptation. Director Frank Oz presents a dramatic reworking of the horror classic, putting a totally over-the-top slant on the story that gives it true comedic value. In the early 21st century, a fast-paced Manhattan couple, Joanna (Nicole Kidman) and Walter (Matthew Broderick), both work for a major television network. While she is a leader and breadwinner in producing reality shows, he is a mere middle-management type. So when Joanna has a nervous breakdown, and Walter takes command, he's happy to find that for once in his life she's not stealing his fire. This sentiment is only asserted by the boys club that welcomes him when they move to the "perfect" town of Stepford, Connecticut. There, the women have been transformed by their husbands into a totally submissive, near-robotic state in which they are blissfully happy doing housework and looking pretty, and are totally compliant to their men. With Claire (Glenn Close) and Mike (Christopher Walken) leading this web of weirdness, Joanna and her only normal friend, Bobbie (Bette Midler), race to solve the mystery before they too become Stepford Wives.