Cagney plunges into his first period film with his fists and charisma at the service of a story tracing Morgan's rise from shanghaied sailor to Barbary power broker. 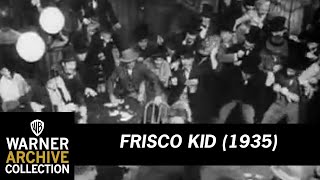 Previously cast in contemporary roles and in one larkish Shakespearean effort, Cagney plunges into his first period film with his fists and charisma at the service of a story tracing Morgan's rise from shanghaied sailor to Barbary power broker. Margaret Lindsay, sharing a marquee with Cagney for the third time in 1935, plays the society demoiselle drawn to Morgan's rough charm. And director Lloyd Bacon keeps thronged scenes of dance-hall excitement and mob vigilantism roiling with atmosphere.

Clearly inspired by the success of Goldwyn's BARBARY COAST, Warner Bros.' THE FRISCO KID stars James Cagney as turn-of-the-century opportunist Bat Morgan. Heading to the gold fields of California, Bat is almost shanghaied in San Francisco but manages not only to escape his would-be captors but also to kill the infamous crime lord Shanghai Duck (Fred Kohler Sr.). The grateful citizens enable Bat to rise to wealth and power on the Barbary Coast. But he's less lucky in love, and it is his seemingly hopeless fascination with Nob Hill debutante Jean Barrat (Margaret Lindsay) that may well bring about Bat's downfall. The film is a festival of cliches, occasionally enlivened by barroom brawls and rowdy musical numbers. Featured as extras in FRISCO KID were several stars and directors of the silent era, a "generous" gesture made by Warner Bros. partly to stave off the inevitability of unionized actors.

Action | Adventure | Rags To Riches | Gangsters | Gambling | Boats
This product is made-on-demand by the manufacturer using DVD-R recordable media. Almost all DVD players can play DVD-Rs (except for some older models made before 2000) - please consult your owner's manual for formats compatible with your player. These DVD-Rs may not play on all computers or DVD player/recorders. To address this, the manufacturer recommends viewing this product on a DVD player that does not have recording capability.