Jeff Healey Get Me Some 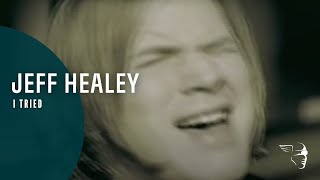 Jeff Healey - I Tried (From Get Me Some CD) (Music Video)

Personnel: Jeff Healey (vocals, acoustic guitar, electric guitar); Joe Rockman (bass guitar); Tom Stephen (drums).
Recording information: Forte Studios, Toronto, Canada; OceanWay Recording, Hollywood, CA.
Photographer: Margaret Malandruccolo.
Over ten years into his recording career, singer/guitarist Jeff Healey continues to churn out rockin' blues -- especially on his 2000 release, Get Me Some. Not a lot has changed over the years -- Healey still specializes in a melodic form of blues-rock that would sound perfect on mainstream rock radio -- or in the follow-up to Roadhouse (if Patrick Swayze decided to revisit his ass-kicking Dalton character). The classic Jeff Healey sound/approach can be heard throughout -- especially on such up-tempo ditties as the album-opening "Which One" and "My Life Story," while also taking it down a notch on the Allman Brothers-esque "Macon Georgia Blue" and the guitar/vocal album-closer, "Rachel's Song." Get Me Some is exactly what you'd expect to hear from a new Healey studio album. ~ Greg Prato