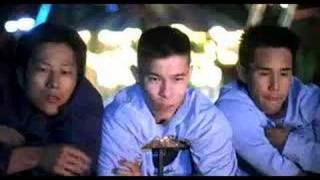 BETTER LUCK TOMORROW, the first feature film from director and screenwriter Justin Lin, is a dark comedy about Asian-American high school students in suburban Los Angeles. High school student Ben Manibag (Parry Shen) is an overachiever. The polite 16-year-old does well in class, studies diligently for the SATs, works in a fast food restaurant, and is involved with extracurricular activities that will enhance his college applications. Essentially, he is an ideal Ivy League candidate. But when he is befriended by senior Daric Loo (Roger Fan)--class valedictorian and captain of the academic decathlon team--his life changes. Bit by bit Ben, his best friend Virgil (Jason Tobin), and Virgil's cousin, Han (Sung Kang), are drawn from their boring suburban high school life to Daric's increasingly risky propositions and into a world of petty crime, drugs, and sex. Eventually, the foursome's activities begin to spin out of control, culminating in shocking events that none of them could anticipate.