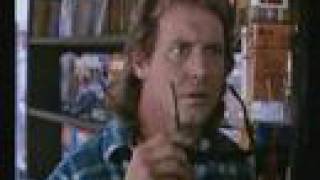 "I have come to kick ass and chew bubble gum...and I'm all out of bubble gum."
- John Nada (Roddy Piper)

John Nada (Roddy Piper) is a quiet loner, a drifter who gets work where ever he can find it. While working on a construction site in L.A. and sleeping in a vagrant community at night, John stumbles upon a secret society of alien beings who pose as wealthy and powerful people in human society. John joins a rebel group commited to exposing this conspiracy, and becomes their reluctant leader and the only hope of the human race. Former wrestler Rowdy Roddy Piper is outstanding as the unassuming hero, playing the role with understated shock at what he uncovers and stubborn courage when he confronts it. Director John Carpenter laces the film with his trademark blend of humor and horror, making aliens that are hideously arrogant, greedy, and easy to hate, while the humans are confused and desperate in their struggle against them. The world looks a little different at the end of THEY LIVE, and one will never look at billboards, money, or sunglasses the same way again. The film contains the longest, and perhaps most realistic, fist fight in film history. Paying homage to INVASION OF THE BODY SNATCHERS, the film was based on the short story EIGHT O'CLOCK IN THE MORNING by Ray Nelson.

Aimless drifter John Nada finds work as a construction worker in Los Angeles, where a wide gulf separates the upper classes from the working classes. After donning a pair of special sunglasses, Nada discovers that many of society's elite are not humans, but aliens who control humanity through subliminal messages. Now he's the only one who can save the Earth from these villainous invaders.