Soul in the Hole: The Street Basketball Story 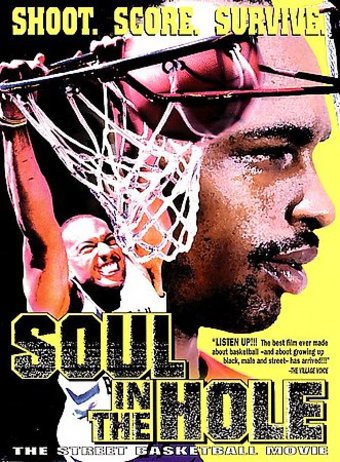 Every summer in the thriving subculture of New York City streetball, neighborhood teams congregate in intensely competitive playground tournaments. This summer the team to beat is Kenny's Kings, and its star point guard Ed "Booger" Smith.

Booger is the kind of player one encounters maybe once in a generation - an almost supernaturally gifted player upon whom Sports Illustrated bestowed the title "King of the Streets". The heart of Soul In The Hole lies in the compelling relationship between the charismatic and unpredictable Booger and his coach/surrogate father Kenny Jones. Over the course of one hot summer, Jones - an irrepressible firetruck of a man - takes on Booger, who teeters on the brink of what could either be wild success or total destruction.

This movie takes an unflinching, heartfelt, and often humorous look at the lives and friendships of the young men who play for the Dream Team of Bed-Stuy, the vibrant street culture of Brooklyn, and the love between a coach and his brilliant player.

A gritty and sometimes grim portrait of Ed "Booger" Smith, star player of "Kenny's Kings," a Brooklyn-based amateur basketball team shepherded by curmudgeonly volunteer coach Kenny Jones. While the summer sun bakes the asphalt, the street life beckons Booger, who can't decide whether to pursue the long shot of professional stardom or take the likelier path of drug dealing and petty crime. More a prismatic character study than a profound statement about inner-city truths or the state of basketball.

He Got Game
$6 Super Savings
Add to Cart