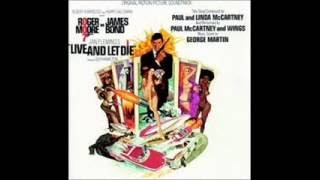 Original score composed by George Martin.
Recorded at Air Studios, London, England in 1973. Includes liner notes by Jeff Bond.
Audio Remixer: Michael McDonald .
Liner Note Author: Jeff Bond.
Recording information: Air Studios, London, England (04/1973).
Arrangers: George Martin; Milton Batiste .
The first James Bond movie -- apart from the "off-brand" spoof Casino Royale -- not to be scored by John Barry (who was working on a stage musical at the time), Live and Let Die's soundtrack still managed to be a pop-music recording event, by virtue of the presence of Paul McCartney & Wings doing the title song. The latter, a Number Two hit in England and a Number Nine single in America, also reunited McCartney and Beatles' producer George Martin, who provides the background score for the film in Barry's absence. Martin is no more than an adequate substitute for Barry -- his music is pleasant and diverting, but largely undistinguished and unmemorable; indeed, "Fillet of Soul -- New Orleans"/"Live and Let Die" as done by B.J. Arnau is far more interesting that any of the instrumental material by Martin, which lacks any distinguishing features to hold the attention of the audience. The best track here is "If He Finds It, Kill Him," which incorporates elements of Monty Norman's original "James Bond Theme." Also included was one of the series' periodic reworkings of Norman's music, which is noisier but not especially improved over the Dr. No album's original. ~ Bruce Eder

73%off
Mario Millo
Shame / The Lighthorsemen (Audio Cassette)
$2.98 on Sale
Add to Cart

George Martin
Maximum Volume: The Life of Beatles Producer The Early...
$28.98 on Sale
Add to Cart