The Chieftains The Celtic Harp

Uncut: 3 out of 5 - "...The Chieftains are a treasure and every home should have at least one of their albums..." 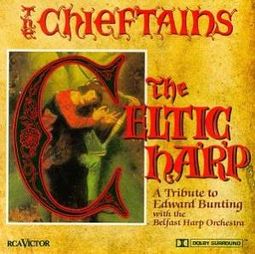 Q - 6/93, p.94
3 Stars - Good - "...After their recent flirtations with the demonic world of rock'n'roll, and reeling under the weight of two Grammys, The Chieftans return to more sedate territory...as necessary an album for collectors as Alan Stivell's RENAISSANCE OF THE CELTIC HARP..."
Uncut - 8/02, p.100
3 out of 5 - "...The Chieftains are a treasure and every home should have at least one of their albums..."

The Chieftains: Kevin Conneff (vocals, bodhran); Martin Fay, Sean Keane (fiddle); Derek Bell (harp, tiompan, harpsichord); Matt Molloy (flute); Paddy Moloney (Uilleann pipes, tin whistle).
Recorded at Windmill Lane Studios, Dublin, Ireland on August 25, 1992; UMRK, Los Angeles, California on June 24, 1992; live at The National Concert Hall, Dublin, Ireland on May 23, 1992; live at The Barbican Hall, London, England on August 1, 1992. Includes liner notes by Paddy Moloney.
THE CELTIC HARP won the 1994 Grammy Award for "Traditional Folk Album."
In 1792, Edward Bunting brought together ten of the foremost Irish harpers for a harp festival in Belfast, Ireland. It was during this period that Bunting collected and catalogued all of the available harp music of the day, which he subsequently published in books until well after 1800.
Two-hundred years after this festival, the Chieftains resurrected much of this beautiful, but largely obscure music, in concert with the Belfast Harp Orchestra. This CD contains both live tracks from the two concerts the Chieftains performed with The Belfast Harp Orchestra, as well as selections recorded later in Dublin and in Los Angeles at Frank Zappa's personal recording studio. Standout tracks include "MacAllistrum's March-Mairseail Alasdroim" and "The Green Fields of America." The former reflects the rich cross-fertilization between Irish and Scottish harpers and pipers. The latter is a more common tune, and the theme, not surprisingly is centered around Irish emigration to the United States.

28%off
The Chieftains
An Irish Evening
$5
Add to Cart

The Chieftains
The Bells of Dublin
$8.60
Add to Cart

The Chieftains
Water From the Well
$6.20 Super Savings
Add to Cart

The Chieftains
Voice of Ages
$16.30
Add to Cart

25%off
The Chieftains
Chieftains Celebration (CD)
$5.98 on Sale
Add to Cart

25%off
The Chieftains
Chieftains Celebration
$5.98 on Sale
Add to Cart

80%off
Meryl Streep / The Chieftains
The Tailor Of Gloucester
$2.98 on Sale
Add to Cart