Off the Black R 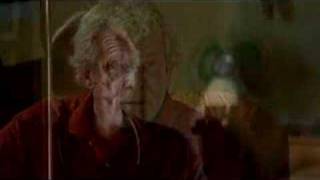 "Off the Black" theatrical trailer

Veteran actor Nick Nolte puts his explosive personal life behind him for a while, returning to what he does best with OFF THE BLACK. Nolte stars as Ray, a weathered high-school baseball umpire whose life veered off the rails some time ago and shows no sign of getting back on track. Nolte slips into the role with consummate ease, and you can almost smell the alcohol on his breath as Ray drunkenly wheezes through the first half-hour of director James Ponsoldt's inaugural feature. Ray slumps to his lowest ebb one night as some pranksters from the high school vandalize his home, but he manages to catch one of the fleeing boys, Dave (Trevor Morgan), as he tries to escape the scene. Dave cleans up the mess in a bid to escape criminal charges, and the two men strike up an unusual friendship full of deep conversation and endless soul searching; their relationship is further developed as they attend Ray's high-school reunion, with Dave pretending to be his son.

Ponsoldt provides a suitably snug small-town backdrop for Nolte and Morgan to work in, and occasionally dips into a pool of impressive supporting players--including Timothy Hutton as Dave's father and Rosemarie DeWitt as Ray's enigmatic friend--to bolster the interaction between the leads. The emotional pasts of Ray and Dave are carefully unraveled, and although the storyline is far from original, Ponsoldt's film is a worthy exercise, thanks to the impressive acting and interplay from Nolte and Morgan.

The Pursuit of Happyness (Blu-ray)
$13.10 Super Savings
Add to Cart