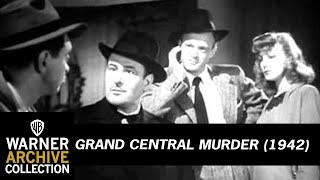 In this witty and fun mystery, it is up to private eye "Rocky" Custer (Van Heflin) to piece together the puzzle of who went far enough in their anger to murder Mida. While waiting for the coroner to release the exact cause of her death, the story unfolds in a series of flashbacks to reveal a complex and intriguing web.

GRAND CENTRAL MURDER was intended as a followup to the MGM "sleeper" KID GLOVE KILLER, with the earlier film's star, Van Heflin, appearing in a similar role. When bitchy actress Mida King (Patricia Dane) is bumped off in a private train car at Grand Central Station, police inspector Gunther (Sam Levene) gathers together all likely suspects. One of these is wisecracking private eye Rocky Custer (Heflin), who endeavors to uncover the genuine murderer himself before Gunther slaps the cuffs on him. Custer's seemingly casual, off-the-cuff methods of detection prove infuriating to Gunther, but guess who solves the mystery-and a particularly baffling one at that--by fadeout time' The film received a mixed reviews from the New York critics, who enjoyed the mystery angle but found fault with Hollywood's convoluted concept of Grand Central Station's floor plan and its unbelievably close proximity to a fictional Broadway theatre (even so, these critics also applauded the ongoing illusion of trains arriving and leaving throughout the picture).

Death | Mystery | Murder | Detective | Crime | Trains | Actors
This product is made-on-demand by the manufacturer using DVD-R recordable media. Almost all DVD players can play DVD-Rs (except for some older models made before 2000) - please consult your owner's manual for formats compatible with your player. These DVD-Rs may not play on all computers or DVD player/recorders. To address this, the manufacturer recommends viewing this product on a DVD player that does not have recording capability.

31%off
Nobody Lives Forever
$8.98 BLACK FRIDAY
Add to Cart

20%off
The Christmas Collection: All the Music You'll Need This... TOP 10 Bestseller
$3.98 BLACK FRIDAY
Add to Cart