The Homecoming: A Christmas Story PG

Get email alerts for A Christmas Story
675 ratings
Available: Usually ships in 3-5 business days
Only 5 copies left
Add to Cart
Add to Wishlist
Format:  DVD
sku:  AA5X
Related products:
Spencer's Mountain for $12.90
Little House on the Prairie - A Merry Ingalls Christmas for $8.40
The Thanksgiving Treasure / The House Without a Christmas Tree for $13
Yes Virginia, There Is a Santa Claus for $9.70
Our customers love us! 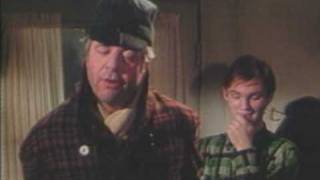 the homecoming: a christmas story (Trailer)

This made-for-television holiday movie about a Depression-era family in rural America launched the popular and long-running TV series The Waltons. It's Christmas Eve on Walton's Mountain, and the close-knit clan prepares to celebrate the holiday together--only to have their love and courage sorely tested as they wait for their father to return home during treacherous weather. With Patricia Neal as the venerable matriarch, Richard Thomas in his famous role as John-Boy, and a strong supporting cast that includes Andrew Duggan, Cleavon Little, Ellen Corby, and Edgar Bergen, THE HOMECOMING celebrates trademark Walton values such as family, love, courage, and hope.

This television adaptation of Earl Hamner Jr.'s autobiographical novel formed the basis for the series "The Waltons."
Set during the Great Depression, "The Homecoming" centers on a family living in the Virginia mountains. This year, everyone worries they will have a lean Christmas, because there's so little money to celebrate.
This anxiety is heightened, however, when the family learns that the bus on which the father commutes to work each day has crashed. The eldest son, feeling the first sensations of adulthood and responsibility, decides to leave home to reach the scene of the accident.
As they wait for news of their father's fate, the family members stick together and, in the process, discover the true meaning of Christmas.

19%off
Christmas in Connecticut (DVD)
$12.10 Super Savings
Add to Cart

A House Without a Christmas Tree (DVD)
$11.10 Super Savings
Add to Cart

41%off
A Christmas Story - Shoot Your Eye Out Inverted Handle Mug
$8.78 Super Savings
Add to Cart

36%off
A Christmas Story - Bandages
$6.38 Super Savings
Add to Cart

25%off
Strange and Unusual Christmas Films, Volume 2
$5.95 on Sale
Add to Cart