Enemy at the Gates (Blu-ray) R

Some Men Are Born To Be Heroes. 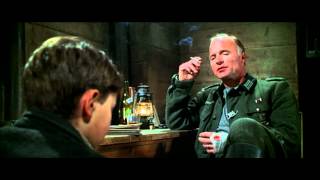 Enemy At The Gates - Trailer

September 1942. The German Army has advanced to the gates of Stalingrad. The Russian Army holds on desperately. It is so poorly equipped that every pair of soldiers is given a single rifle--the second man only gets the weapon when the first is cut down. Trapped in no man's land between the opposing armies, Russian recruit Vassili Zaitsev (Jude Law) finally acquires a rifle from Political Officer Danilov (Joseph Fiennes). Danilov is astonished when Zaitsev picks off several German officers. On their return to the Russian lines, Danilov writes about Zaitsev's exploits in the army newspaper. Zaitsev is assigned to a sniper unit. He kills more German officers and, thanks to Danilov, becomes a hero. In retaliation, the Germans bring in sharpshooter Major König (Ed Harris) from Berlin--to hunt Zaitsev. The two snipers engage in a desperate duel, as the appalling Battle of Stalingrad rages.

In ENEMY AT THE GATES, director Jean-Jacques Annaud uses a palate of dull greens, blues, and greys to tell the powerful, true story of Russian sniper Vassili Zaitsev. The film is distinguished by fine performances from Law, Fiennes, Rachel Weisz as a female soldier, and Bob Hoskins as Nikita Khrushchev--with Harris particularly notable as the chilly, aristocratic König.

Black Hawk Down
$10
Add to Cart